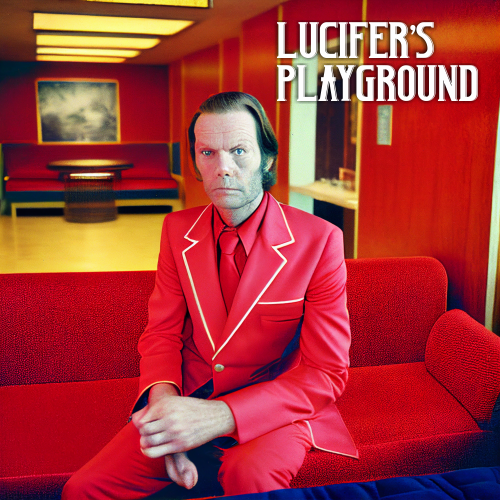 The Lucky’s Motor Inn is a new low key motor inn that replaced Lucifer’s Playground after the old one was burned down by the locals. The new inn looks almost identical to the old one, with a neon “Vacancy” sign flickering in the window, and the same “Lucky’s Motor Inn” sign out front. But once you step inside, it’s clear that this is a completely different place.

The inn has a small bar, where the locals can be found hanging out. They’re a eclectic bunch – hippies, digital shamans, costume ball enthusiasts – and they’re always up for a good time. The inn often hosts all-night parties that seem to go on forever, attracting a crowd of enthusiastic fun-seekers looking for new experiences. The locals tell the same stories of their lives, read tarot cards, and drink endless booze with a crowd that seems like a blur in the memories of those who come and go.

The owner of the Lucky’s, the one who replaced Lucifer, is a man known only as “Lucky”. He’s just as swarthy as his predecessor, but he’s a much more cautious operator. He doesn’t just let anyone in – he waits for the worst of society and keeps them. The ones who would be missed are used for their energies, sucked dry of money and spirit, and sent on their journey used and exhausted, not knowing that their energies fed the locals of Lucky’s Motor Inn and night club.

The inn itself is a strange and eerie place, with a dark energy that seems to linger in the air. The guests who stay there are never quite sure what’s going on, but they can’t help but feel drawn to the place. They’re caught in a never-ending cycle of partying and excess, and before long, they’ve lost all sense of time and place. But eventually, when their money and energy is exhausted, they’re sent on their way, never to return.

The Lucky’s Motor Inn is a place of endless partying, strange occurrences and a never-ending cycle of darkness, where the souls of the guilty are taken, and their energies used to fuel the locals and the night. Where the Inn is a gateway to a different reality, a version of hell for those who don’t know they are in one. And the ones who do, don’t want to leave.

The Lucky’s Motor Inn is a place of mystery and intrigue, where the locals are always up for a good time, and the energy is always high. But beneath the surface, there is a dark and sinister energy that permeates the very walls of the building. Those who stay at the inn are never quite sure what’s going on, but they can’t help but feel drawn to the place. They’re caught in a never-ending cycle of partying and excess, but they’re never truly satisfied. They’re always searching for something more, something that they can never quite put their finger on.

The inn has a reputation for being a place where anything goes, and people from all walks of life come to experience the wild and strange energy of the place. They come for the music, the drinks, and the endless party, but they stay for the strange and mysterious energy that seems to linger in the air.

As time goes on, some of the guests begin to notice that things are not quite as they seem. They start to feel drained of energy, and they notice that the locals are always around, watching and waiting. They start to feel like they’re being watched, and they can’t shake the feeling that they’re being used for something they can’t quite understand.

But despite their growing sense of unease, they can’t bring themselves to leave. They’re hooked on the energy of the place, and they can’t shake the feeling that they’re meant to be there. They’re trapped in a cycle of addiction, and they’re too deep to turn back now.

The Lucky’s Motor Inn is a place where the guilty come to pay for their sins, a place where souls are taken, and energy is siphoned off to fuel the locals and the never-ending party. It’s a place where the line between reality and fantasy is blurred, and where those who enter may never escape.

Lucifer’s Playground is a vintage motor inn situated on a forgotten highway in the middle of nowhere. It’s a place that’s been around for decades, but few people know of its existence. The building itself is run-down and unassuming, with a neon “Vacancy” sign flickering in the window, and a large “Lucifer’s Playground” sign out front. But as soon as you step inside, it’s clear that this is no ordinary roadside motel.

The lobby is dimly lit and decorated in a retro, swanky style. The walls are adorned with vintage travel posters, and the floors are lined with red shag carpeting. Men in red tuxedos man the front desk, and they’re always ready to check you in and hand you a vintage keychain for your room. The air conditioning is always blasting, and there’s a color TV in every room for your entertainment.

The hourly room rentals advertised with a catch “hourly room rental will provide more privacy but with more taxes” , which is a hint that this is not the place for a peaceful night’s rest. Strange occurrences happen in the room and the guests have no idea what they are in for. The place is a nightmare, but they don’t know they’re in hell yet.

What the guests don’t know is that the inn is run by none other than Lucifer himself, who has taken on the guise of the suave and swarthy innkeeper. He’s always lurking in the shadows, watching and waiting for unsuspecting sinners to check in. And once they do, they’re trapped in a never-ending cycle of horror and terror. They can never leave and they are forced to relive their sins in an endless loop.

As the night wears on, strange noises echo through the corridors and strange figures can be seen lurking in the shadows. But when the guests try to leave, they find that the door to their room won’t budge. The windows are sealed shut and the phone is dead. They’re trapped, with no way out. And so, they’re forced to spend the rest of eternity in Lucifer’s Playground, a vintage motel that’s anything but vintage, a place where the sinners come to pay for their sins in the most terrifying way possible.